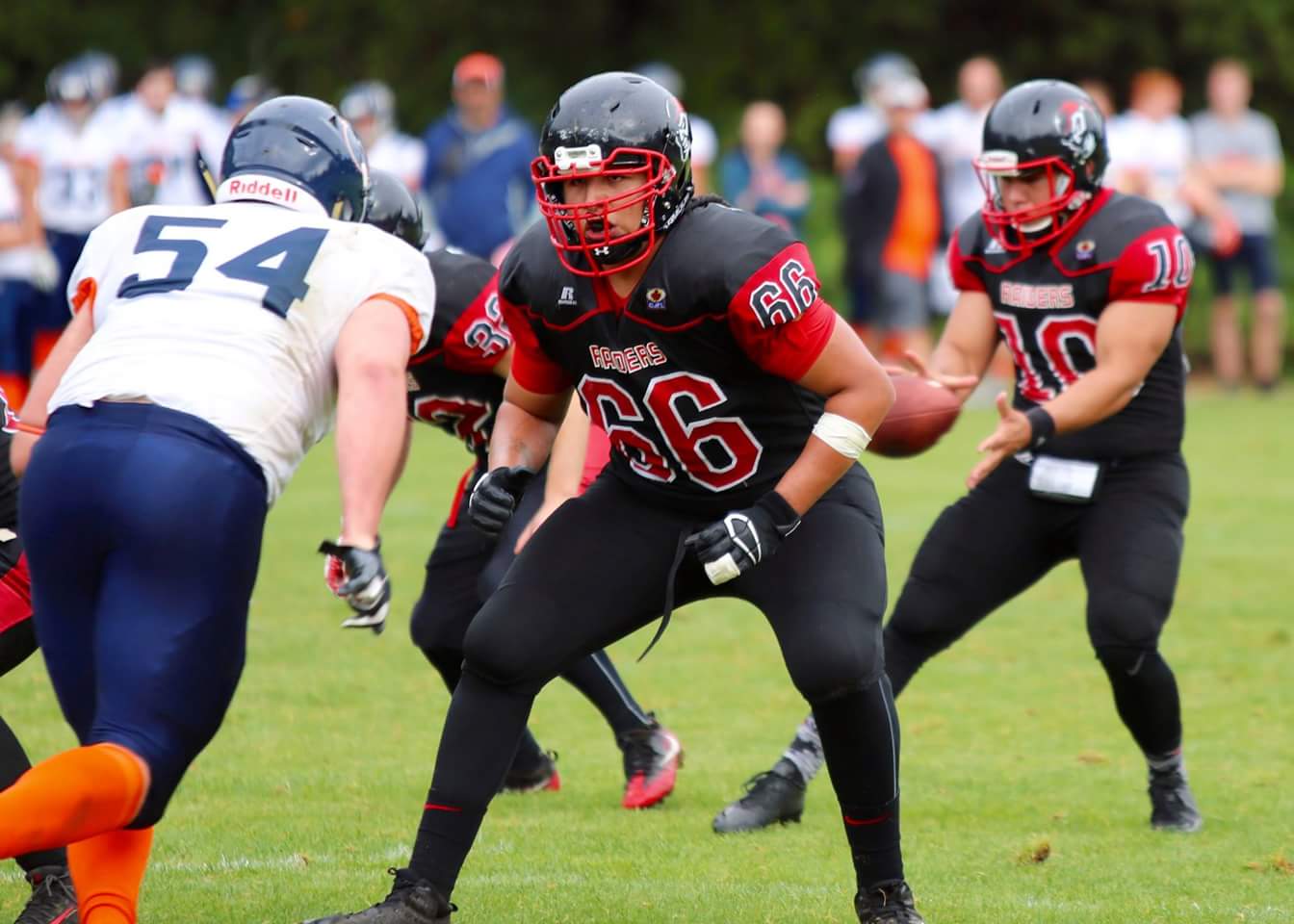 For the last four years, this local youth has been determined to finish his five year contract with the Canadian Junior Football League.

Traven Weasle Traveller, 22,  has been playing left tackle for the Vancouver Island Raiders since he graduated from high school.

Weasle Traveller loves playing sports, and when the opportunity rose to attend a meeting with the coach of the Vancouver Island Raiders he jumped at the opportunity to sit in and listen.

“Sports where my life throughout high school,” he said.

Fast forward five years later, he is now entering his final season with the team.

It’s that feeling he gets when the adrenaline takes over his emotions and rushes through his body that makes the game exciting.

“I like the competitiveness of it, it’s different from other sports i’ve played,” He adds. Traven #66 during one of his games for the Vancouver Island Raiders. Photo by Brenda Pelland McIntosh

Weasle Traveller says the time he has spent playing for the team has allowed him to experience life outside of Alberta.

Playing sports beyond high school was always something Weasle Traveller wanted to do.

That is why he jumped at the opportunity to attend a meeting with the Vancouver Island Raiders even though he wasn’t graduating yet.

Like any other teenager, having the motivation to chase your dreams is not always an easy task.

Following the meeting with the coaches, Weasle Traveller was offered a chance to try out for a spring training camp with the team during his grade 11 year.

However, since he knew he wasn’t old enough to play for the team yet he was reluctant to attend the camp.

“I went home and told my mom and she immediately said, ‘No you’re going for the experience,’” he laughs.

That was the beginning of his junior football career.

Weasle Traveller said that his mom, Serene Weasle Traveller, has always encouraged him to accept different opportunities and experience new things in his life.

He remembers all the years he would come from school and say to his mom “I don’t know if want to play basketball” or he would complain about being sore after practise.

“She was always pushing me to do things throughout my life,” he said.

Serene has always wanted to her son to be successful in his sports because she believed that was his “ticket into the world.”

“It was important for me to know that if he started something, he had to finish it out to the end,” she said. Traven with his mom Serene, his siblings and his grand parents. Photo Courtesy of Traven Weasle Traveller.

Adding that she wanted to him know that if he works hard he can achieve something great.

“I would really have to talk him though those difficult times so he would see that all difficult things pass,” she said.

She went on to say that she knew Traven would always learn a good life lesson after overcoming his obstacles.

Traven admits that during his third season playing for the Vancouver Island team was the hardest year he had.

“B.C is beautiful and awesome but it is not the same as being home with my family.”

His moms encouraging words and constantly telling him not to quit has brought him to his final year playing for the Canadian Junior Football League.

Although he said he hasn’t made a decision for what he plans to do following his final year.

He said that he hopes to go to school and play for a university team, although he admits he also would like to move into coaching and create a football team in his home community.

Traven was recently named the top 41 out of 50 for the Canadian Junior Football League.