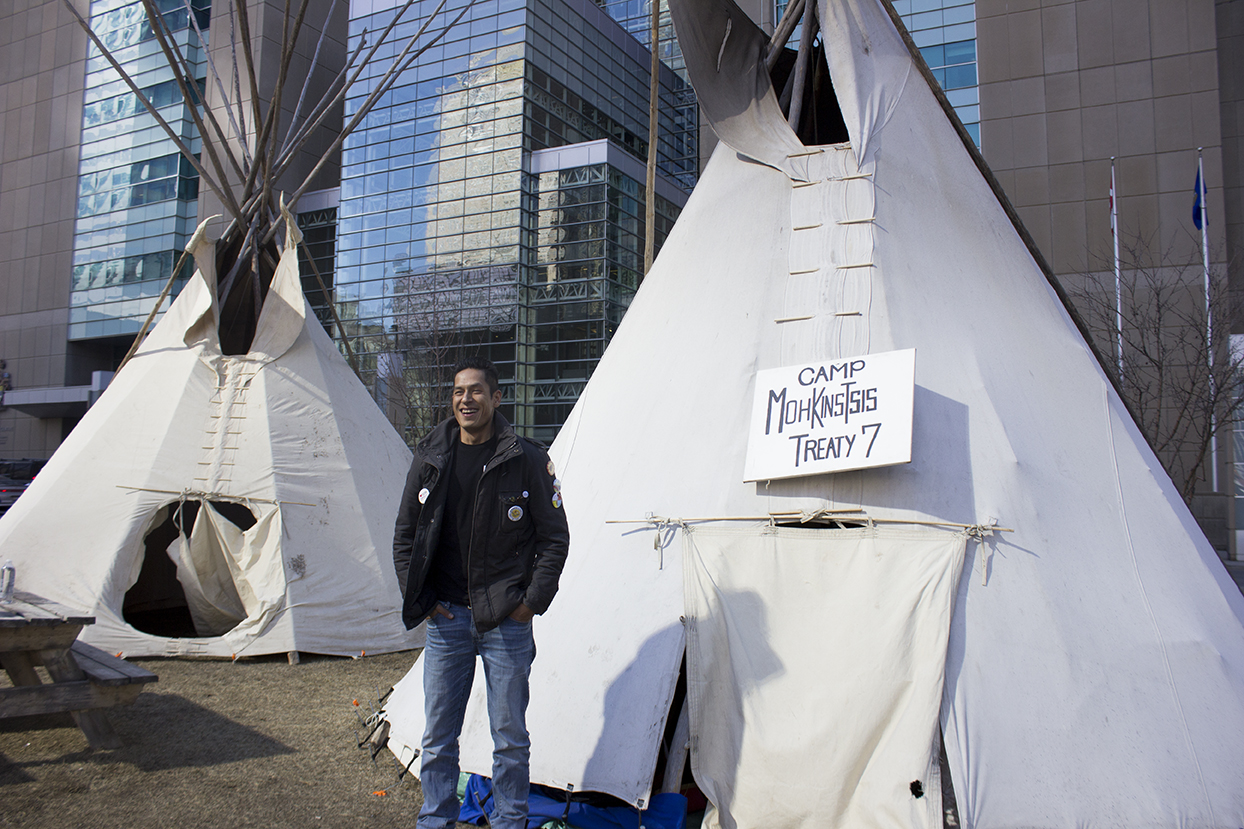 Garret Smith, founder of the Mohkinstsis camp is set up outside of the Calgary Courts Centre. Photo by Tawnya Plain Eagle.

Mohkinstsis Camp in Calgary is a bridge between First Nations and non-Indigenous people.

The camp is also an open space for indigenous people who live in the city to come and take part in cultural practices.

Garret Smith, Founder of Camp Mohkinstsis, says that the idea behind the teepee set-up is to create a mutual understanding between Indigenous and non-Indigenous people who are living in traditional Blackfoot territory.

“It’s just to promote a level of understanding between one another,“ Smith said.

He added the goal is to attempt an ideal conversation around reconciliation as well as healing his own people.

The Camp is located in the downtown core of Calgary, Alta just below the Calgary Court Centre.

Contois camped in front of the legislature in Winnipeg to demand judicial reform for the murders of Tina Fontaine and Colten Boushie. Smith hopes there can be a permanent place in Calgary for his camp. Photo by Tawnya Plain Eagle

“That was mainly a protest camp, that was set up mainly to protest the injustices at that time,” Smith added.

Councillor Lowell Yellow Horn says the camp is establishing a Piikani and Blackfoot presence in a major city like Calgary.

“If he maintains a positive focus in his campaign, the surrounding demographic will view it as a good movement,” Yellow Horn said.

Smith’s future goal for the camp is to have a permanent set up somewhere in the city.

He added that it is not plausible to have the camp set up outside the courthouse indefinitely.

“There is a parkade underneath this area right now so building on top of it is an actual issue," Smith said.

However, he hopes that there can be a permanent spot for Camp Mohkinstsis in the downtown area.

Yellow Horn said there is always protocols for setting up a teepee, and adds that as long as he stays true to cultural practice it should be fine.

According to Smith, he said that there is always someone who stays overnight at the camp.

“It’s a grassroots campaign in the city,” Yellow Horn said. “We can forget that the natives living in the city need cultural too.”