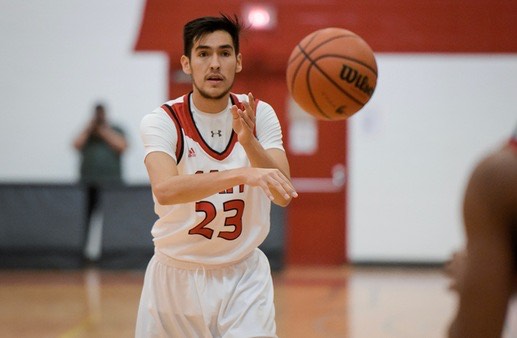 Tyis Yellow Horn was on his way to the CCAA National Championships in Ottawa with the SAIT Trojans before the tournament was cancelled due to the Covid-19 pandemic.

“It was a tough way to end a season,” Yellow Horn said.

Nationals was going to be the cherry on top of another great season for the SAIT Trojans.

The team had just won the ACAC championships for the fourth consecutive season.

“I was really looking forward to competing against the top 8 teams in Canada,” Yellow Horn said.

“We never really got that kind of closure we wanted on the season,” he admits.

This would have been Yellow Horns first time attending this tournament.

“It’s one thing to compete in Alberta, but it’s another to play against players from other provinces,” he said.

He recalls his coach talking about playing against an 18-year-old guy who is a prospect for the NBA.

Yellow Horn looks forward to opportunities like that, which will challenge his own personal growth within the sport.

He adds that his biggest let down was not being able to play against such high caliber teams.

Yellow Horn originally played for the Mount Royal Cougars until 2017 when the high pressure of university started effecting his mental health.

It was then he decided to take two years off before agreeing to return back to the sport, when he got offered to play with the Trojans.

“He offered me a spot at the bottom of the roster, but I just felt excited for the opportunity to play this year. I’m really grateful for that.”

Yellow Horn had no idea about the type of season he was about to experience.

During his winter break, he travelled down to Montana before heading Toronto for additional tournament.

SAIT Trojans also finished second in the original season with a total of 34 points in the ACAC south zone division.

“I played with a great group of guys, that allowed me to have some of those growing pains,” he said.

All this success in one year doesn’t change the fact that the season was shortened due to the Covid-19.

SAIT Trojans will be hosting the CCAA National Championships in 2021, that gives him motivation to keep training for next season.