The 63rd annual Piikani Nation pow wow was held during the last weekend in July from the 29th-31st. After twoyears of no pow wow celebration dancers, drum groups, and spectators braved the heat and celebrated for the weekend.

In total, Piikani pow wow had seven drum groups registered for the contest and one non-contest drum group from Piikani, the North Stone singers. Drum groups came as far as White Swan, Washington, the USA to Frog Lake,
Alberta. One of the registered drum groups for the contest was Young Spirit singers from Frog Lake, AB, a two-time Grammy nominee in the world music industry and a well-known drum group from within Indian Country. Black Lodge singers made their appearance as they came in from White Swan Washington. Black Lodge singers, originally from the Blackfeet Nation in Montana, from Washington, USA also competed in the competition. Another big-name drum group that had also registered in the contest was the Sharp Shooter singers who hail from five different states such as California, Minnesota, Oregon, Arizona, New Mexico, and Canada. Local drum groups from the Blood Tribe, Morley, and the Siksika Nation also entered in the contest. 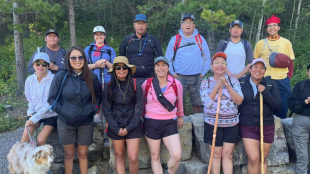