Aakom-Kiyii Health Services has been providing vaccines clinics to the public since the beginning of February.

A Vaccine rollout to Indigenous communities was originally planned for January; however, a letter was written from 200 Alberta doctors to Minister Tyler Shandro, petitioning for all Alberta health workers within the  hospital systems to be vaccinated.

That shifted the 10,000 doses set aside for Indigenous communities to be
re-routed to Alberta health workers within the hospital systems.

In early December 49 Indigenous people within Alberta had passed away from Covid-19.

While Hospitalizations and ICU admissions for Indigenous people were also high, First Nation communities were identified as priority one for the Alberta vaccine roll out plan.

“After elders who were receiving long time care received their first dose, we totally had planned to for the rest of First Nation’s [in Alberta] to be vaccinated,” she said.

When the Government announced it was re-routing the vaccines, that depleted the original 10,000 doses set as side for Indigenous people.

“From that shift, First Nations weren’t consulted, weren’t engaged or advised that there was going to be a delay in those 10,000 doses getting to us,” she added.

Healy states that procurement for the vaccines is federal, then it is distributed to the provinces and territories for roll out.

“The First Nation relationship and the ones responsible for First Nation Health Service delivery are federal,” Healy said.

“We were getting stuck in provincial politics and this was putting a delay in our vaccine roll out plan,” she added.

This prompted Healy along with the Chief of the Piikani Nation to speak with Trish Merrithew-Mercredi, Assistant Deputy Minister for the Government of Alberta, Dr. Deena Hinshaw, Chief medical officer of Alberta, and Keith Conn Assistant Deputy Minister, First Nations and Inuit Health Branch, Department of Indigenous Services Canada to plead for vaccines to be distributed to First Nation communities directly.

“While we were on this call, we asked Dr. Hinshaw 'why the roll out for First Nations not done at the federal level',” Healy said.

According to Healy, the decision was made to release stress on the health care system.

However, at the time the decision was made, in between Jan. 6 to Jan. 20, when high death risk was the priority for vaccine roll out, Alberta Health Care workers only had four deaths since the beginning of the pandemic, while First Nations had 49 deaths at the time.

“If the shift was changed to protect the health system when you look at who was currently in the hospital at that time, 40 per cent of those beds were occupied by First Nation people and 38 per cent were in ICU” Healy said.

Healy pointed out from the time they made that shift between Jan. 6 to Jan. 20, twenty-one additional First Nation people had passed away from COVID-19.

“We lost one to two people per day, because they shifted priority,” Healy added.

Following their phone call with the ministers, vaccines were brought to First Nation communities within two days, based on the way they had articulated and presented the COVID-19 data to the ministers.

Since April 21, 8960 doses have been administered to Indigenous people within Blackfoot Confederacy. 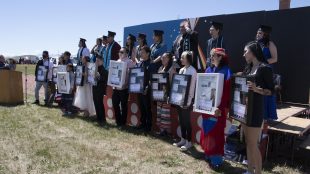