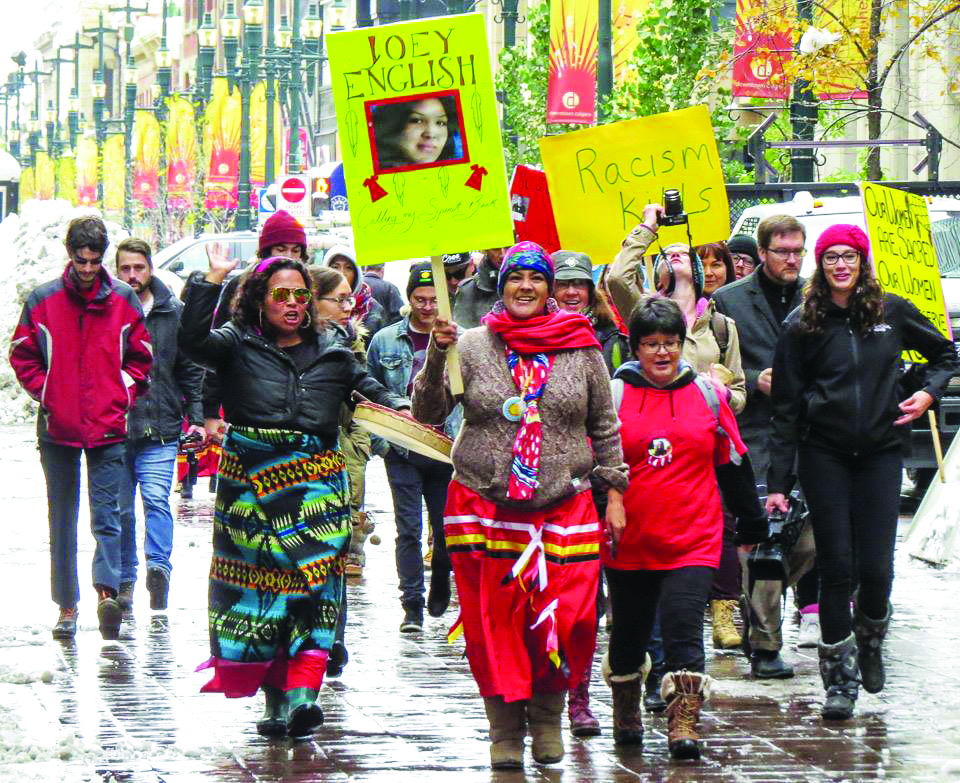 Stephanie English as she reached the Sisters in Spirit Vigil in Calgary on Oct 4. following her walk from Piikani to Calgary. Photo by Albert Woo.

Stephane English started her journey on the evening of Oct 2, just as the first snowfall was beginning to come down.

The extreme winds and low visibility wasn’t going to stop English, as this was something she and her daughters, Alison Moses and Joey English had planned years ago.

“We had dreams that we made a commitment too,” English said.

She suddenly lost Alison to suicide in 2015, a year later Joey’s body was found dismembered and scattered across Calgary.

Across the country, many Indigenous women and girls have been murdered and going missing in the last few decades.

According to the Native Women’s Association of Canada, there are approximately 582 unresolved cases of missing Indigenous women and girls across the country.

English expressed the idea behind her walk was to let the public know that Indigenous people are still going missing and the numbers are rising.

After losing her two daughters, she said services such as grievance counselling didn’t help her get closure but rather opened up her wounds.

She also felt she was not receiving the support she needed from the justice system.

Adding that she was only portrayed as an example of yet another victim, saying she felt humiliated.

That is why this walk was so important for her.

“I really wanted to do it for my daughters and respect who they were as women,” she said.

English started to plan her walk in June.

With the support of her family and The Awo Taan Healing Lodge in Calgary, the walk came together as planned.

Prior to leaving for the walk, she received blessings from her grandmother, adding that throughout the walk, she continued to pray to the creator for strength. Stephanie English is joined by family and friends along highway 2 as she walks from Piikani to Calgary in memory of her two daughters. Photo by Autumn Eagle Speaker.

English said the beginning of her journey was lonely, as she reached Stavely, she was joined by Ester Tailfeathers.

“There was always a miracle that showed up within this journey,” she said.

Students from the Kainai High school also stopped by dropping rose pedals for half a mile up the road.

She was also joined by many supporters such as Dale Lowhorn and his grandchildren, the ladies from Awo Taan Healing Lodge, Autumn Eagle Speaker, Garrett Smith and Donna Many Grey Horses, who walked down the last stretch of road with her before reaching the city.

English said that the walk brought her a lot of healing, persevering, forgiveness and understanding other families who are going through the same thing.

English, made it to Calgary at 1:45 am, the morning before the vigil on Oct 4.

“When I saw the first set of street lights, I wanted to roll around on the ground, that feeling of rejoice, that we did it,” she said.

“I want to really emphasise the word ‘we’ because I know in my heart that Joey, Alison and others were with me on this journey,” she added.

English hopes this walk could be an annual walk leading up to the sisters in spirit vigil in Calgary.