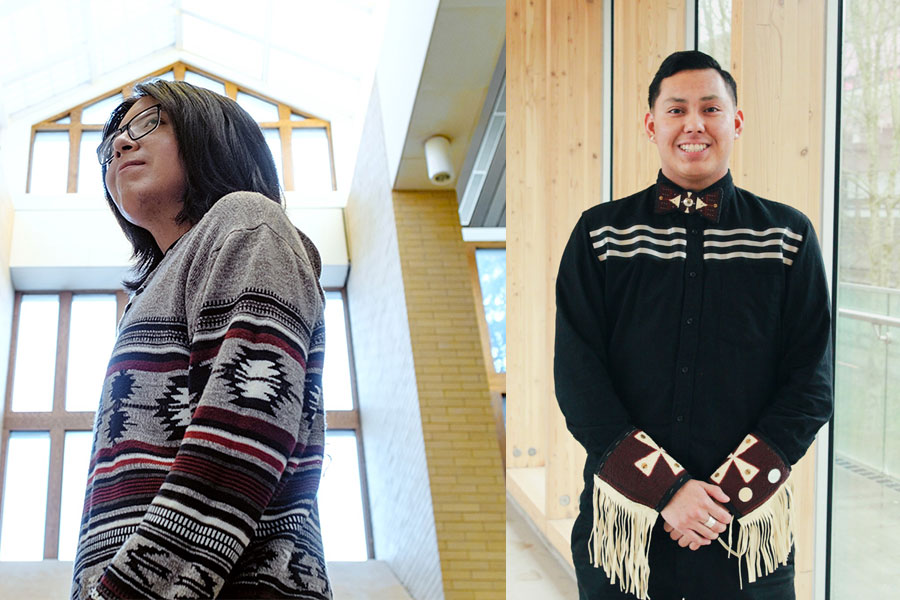 “When I found out I was the only indigenous student to run [as student president] and to be successful, I felt like I had a moral and ethical responsibility to ensure that Indigenous representation didn’t just start and end with me,” Stripped Wolf said.

Both Provost and Striped Wolf through their education have been working hard to break barriers and bring additional support to their Indigenous peers that these institutions don’t bring.

Striped Wolf’s volunteer efforts with the student centre and the Iniskim centre have led to opportunities in France, Germany, as well the opportunity to research his now award-winning paper surrounding Indigenous trauma.

“All this knowledge that I developed along the way, I wanted to see how I can help the community,” Striped Wolf added.

As for Provost, he is enrolled in the Indigenous Studies program at Simon Fraser University with a focus on public policy and methodology.

“My studies have really helped me frame the direction of work that I want to do … and think critical about institutions and proper support that Indigenous students should have,” Provost said.

Prior to running for vice president, Provost was sitting on the First Nation’s Student Association (FNSA) board.

He recalls when he would feel frustrated with the lack of resources and support the FNSA was receiving from the students association.

“Any campaigns we wanted to run, it was difficult to receive any funds or support for a long time, it was frustrating,” he said.

Over time and with consistent prodding, Provost and the rest of his board were able to provide the FNSA with a COVID-19 relief fund to support graduate and undergraduate students with a bursary, as well a permanent staff to support the association – which they will start this fall.

“[previously elected] students promised they would work with us and support us but never came to talk to us, I felt they were just using it as a buzz word to get elected,” Provost said.

He felt if he was to run as vice president, he could do the work which he thought was important, in a way that would build relationships in a positive way.

When Striped Wolf began the research for his Indigenous Trauma paper, he wanted to look at the “barriers to success for Indigenous people.”

“One thing I realized was there was a lack of trust within our own selves as Indigenous people.”

According to Striped Wolf, his findings ultimately came down Indigenous folks inability to trust people, themselves and systems such as institutions and governments - which stemmed from residential schools and being punished as a child.

“You need to be able to trust yourself when you want to do a risky thing, such as going to university or starting a business,” he added.

A 2011 survey from Statistics Canada states that only 9.8 per cent of the Indigenous population in Canada had a degree from any university within the country.

Although his research is not related to his position at Mount Royal University, it coincides with his goal to alter the current systems in place to make sure they’ll always be Indigenous representation in a student board going forward.

“Decolonization for me is trying to reconstruct the systems that was originally created with Indigenous people not in mind,” Striped Wolf said.

Which both Provost and Striped Wolf think a separate Indigenous advisory committee would be useful.

“It is ridiculous that I am the first Indigenous person at [Mount Royal University} to be given this opportunity,” Striped Wolf added.

Using the foundation of his research, Striped Wolf wants to implement certain tools that will allow faculty and the students association to abide by when making decisions that could affect the wellbeing of Indigenous students at Mount Royal University.

For Provost, as vice president at Simon Fraser University, he says these changes are slowly beginning implemented based on the fact that more Indigenous students are putting themselves in positions to make those changes.

Although updated data isn’t available from statistics canada on Indigenous student’s success rate at universities across Canada, Provost is confident that the rate of success for Indigenous students has quickly grown far beyond 9.8 per cent based on the fact that within a few years the number of Indigenous students graduating from SFU jumped from 68 to 200 students.

“It’s important that we continue to bring our experiences forward and what we deal with, or else they’ll continue to be ignored,” Provost said.